Some of you may have noticed that I have had a hard time blogging the last few months. Part of the difficulty for me has been the feeling of being an outsider, in my own country and in the world. 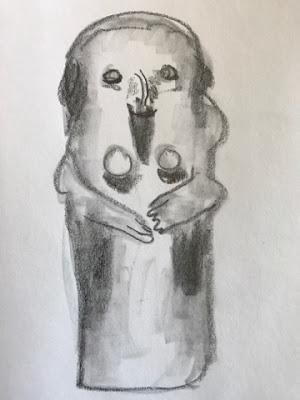 Oddly, not writing so much poetry has led me to do more visual art work (a real bit of grace.)  Here, the feeling of being an outsider has been very freeing since (with no real training), I have very few expectations about my visual art.

There is actually a long tradition of outsider art in the visual arts, that is, of unschooled  artists making of a body of work; Grandma Moses was a famous outsider artist; Simon Rodia of Watts Tower fame another.

So, the prompt today is based on the idea of the outsider.  You can approach this from any direction you wish–an outsider as refugee or exile; an outsider at a party or at school or from a clique.

You could also use the prompt to try to write as an outsider–like someone unfamiliar with the established tools of writing (an “outsider literary artist”.)  Or you could write about simply being outside, that is, in nature.

Finally, you could use this as an ekphrastic challenge and just write about a picture made by an outsider artist.